I should be gearing up for the big move, but instead I decided to put together a short Graphic Adventure game demo for you all. Aren’t I nice? 🙂 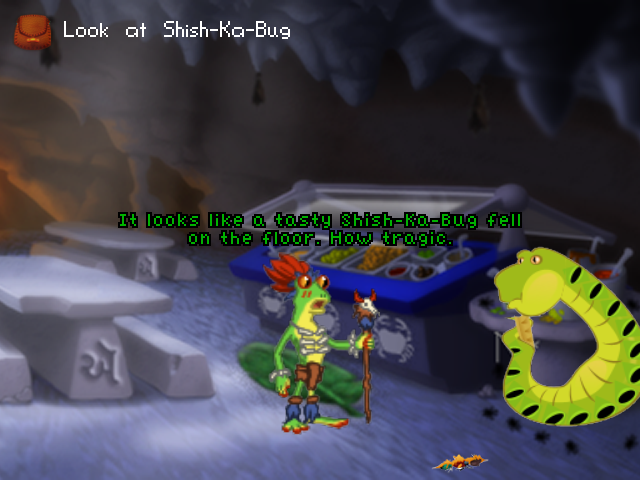 The game is called Broken Blueprint Beginnings, and has been a work in progress for about 5 years. Varying with work from different artists, designs, programmers, and tons of other things, so I finally decided to nail it down. You may noticed a few mismatching art styles due to the smorgasbord or time and people that worked on it, but hey, it’s FREE and it’s just a short demo to show you what it can be in the future. 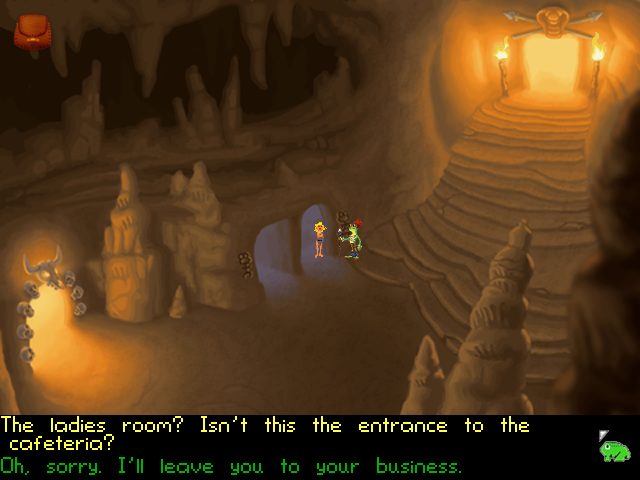 Anyway, Broken Blueprint is about a tribe of Frogs and Snakes living together in The Caves. You play as Hunka, the tribes Witchdoctor 🙂 It’s very reminiscent of the old Lucasarts Graphic Adventure games such as Monkey Island, Day of the Tentacle, Sam & Max, etc. Or if you were a Sierra fan of Leisure Suit Larry, King’s Quest, Willy Beamish, etc. So if you love those games, you’ll be right at home with Broken Blueprint.

It’s full of humor as usual 🙂  Those who like the Arvale series and enjoy simply walking around and interacting with objects will definitely love this one. Experienced Adventure gamers can possibly breeze through the game in about 10-30 minutes. If you spend your time Looking at, Grabbing, Trying out inventory items on things, and Talking with each and every character and object (including every single Torch) in the game, you could spend over an hour or so just reading all the different responses.

[Update: I just tried it on an Intel Mac with Crossover Mac and it works wonderfully, If you have an Intel Mac you may want to download the Crossover trial just to play it ;)]

[Update 2: Some people with computers from the last decade (Windows 2000 and earlier) are having problems running it, getting errors about the display. This can easily be fixed by downloading the latest DirectX version from Microsoft.]

Gameplay is basically move your mouse around, and click on stuff to try out different actions. The basic controls are explained in the intro to the game so I won’t go into it.

More screenshots on the Games Page.

Have a wonderful weekend!